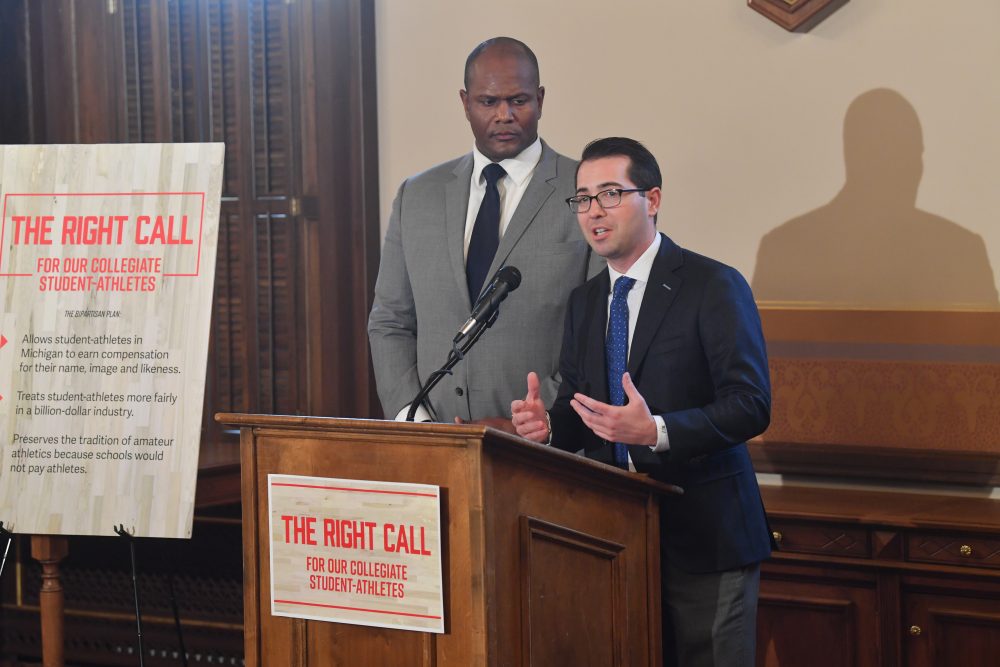 A pair of former collegiate athletes now serving in the Michigan Legislature are spearheading a bipartisan plan to allow current and future student-athletes to receive fair compensation for their name, image and likeness.

The legislation from state Reps. Brandt Iden (R-Oshtemo) and Joe Tate (D-Detroit) address the National Collegiate Athletic Association’s (NCAA) strict and archaic rules on amateurism. A bill sponsored by Iden would allow student-athletes to receive compensation from a third party in exchange for using any forms of name, likeness or image – something any other private citizen is free to do at any time.

The practice is now banned by the NCAA, despite players’ name and likenesses being a driving force behind hundreds of millions of dollars in profits for numerous member institutions. The association recently committed to eventually allowing compensation for name, image and likeness, but Iden and Tate’s proposals move to put the framework directly into law so Michigan collegiate athletes can have their personal rights and economic freedoms protected.

“We’re not going to punt on this issue. We’re going to lead,” said Iden, who played tennis at Kalamazoo College. “College sports is a billion-dollar business, but these outdated NCAA rules treat the student-athletes at the heart of that business unfairly. Right now, student-athletes have no liberty when it comes to capitalizing on their own names and images.”

Tate, who was a three-year starting offensive lineman for Michigan State in a career spanning from 2000-03 before playing in the National Football League, said: “Someone can set up a signing at their store and charge $25 per inscription, but the student-athlete providing that signature or inscription gets nothing under current NCAA bylaws. Athletes who are struggling to get by and unable to even have a little walking around money are going to be able to enter into the market through their current craft, and that’s a positive and just development.”

An additional bill sponsored by Tate also allows agents to enter into contracts with student-athletes, which is currently considered a crime in Michigan. If signed into law, the plans would be effective in July 2020.